Diamond Head is easily one of Hawaii’s most recognizable landmarks. Known for its historic trail, beautiful coastal views, and military history, the state monument encompasses more than 745 acres, including the entire crater. 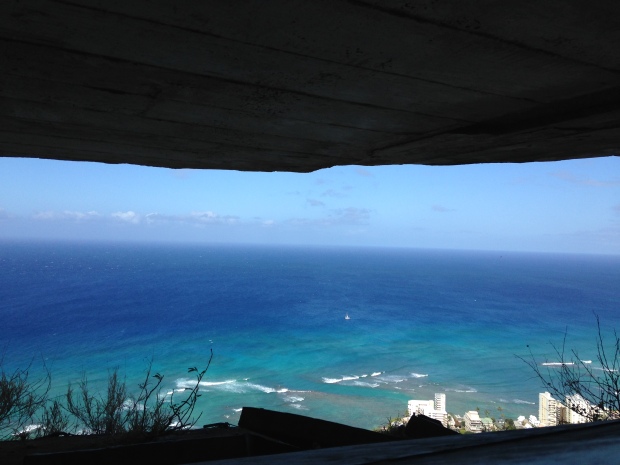 We had plans to try to get to Diamond Head earlier in the week, but our schedule ended up not allowing for it. That’s how we found ourselves getting up early the day our plane left to squeeze this hike in as our farewell to Oahu. 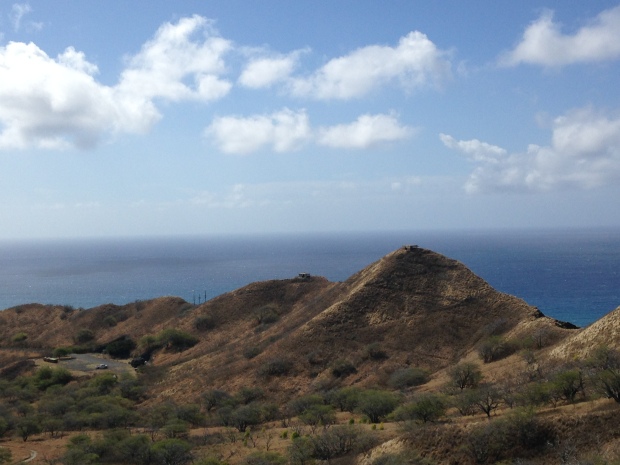 Although this is a relatively moderate hike, it is steep and uneven in areas, and the last 1/10 of a mile is ALL stairs. Hawaii’s Division of State Parks recommends allowing 1.5 to 2 hours to complete the hike. If you’re an avid hiker and on a time-crunch, like us, you can do it less. We were up and down within 45-50 minutes. 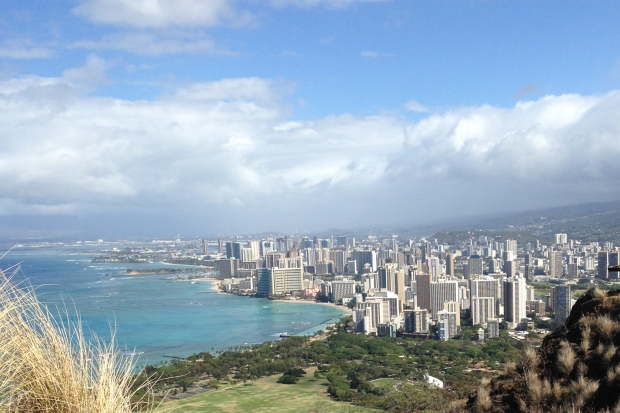 Even though it  meant getting up early, practically sprinting up the trail and back down, and rushing “home” to shower and take care of last-minute packing before our flight back to SoCal, we’re really glad we decided to squeeze this in.

Terrain: Somewhat steep; includes many switchbacks, a steep staircase, and a lighted tunnel

We didn’t arrive on Oahu with an itinerary in hand. After months of wedding planning and seemingly endless to-do lists we were looking forward to a relaxing, tropical vacation. Visiting Pearl Harbor was pretty much the only “touristy” must-do activity we wanted to be sure to fit in on our weeklong stay on the island.

We set aside a half-day for visiting Pearl Harbor, which was enough time for us; however, if you’re a true history buff or aviation enthusiast, you could easily spend more time there. We bought the Passport to Pearl Harbor combo tour, which allowed us to check out the U.S.S. Arizona Memorial, the U.S.S. Bowfin Submarine Museum and Park, the Battleship Missouri Memorial, and the Pacific Aviation Museum on Ford Island.

Note that admission to the U.S.S. Arizona Memorial is free, but it is also first-come, first-serve, even if it is part of a combo like ours. After we got our Passport deal we still had to go get the time-stamped tickets for the Arizona tour. Do so right away…it’s a popular tourist site on the island, and the wait time can be a couple hours long. We visited the U.S.S. Bowfin while we waited for our departure to the Arizona.

The U.S.S. Bowfin is a WWII-era submarine that sank 44 enemy ships during World War II. Today it is a National Historic Landmark and museum that offers a peek into what it was like to live and work aboard a sub at that time. We actually didn’t get a chance to go into the museum, but read that it contains more than 4,000 submarine-related artifacts.

Touring the U.S.S. Arizona Memorial includes a short documentary on the history of Pearl Harbor before a short boat ride to the memorial. We recommend doing the narrated tour, which provides a headset and control to punch in the number posted at various places at the memorial. This was definitely the most sobering and introspective part of our Pearl Harbor excursion as we remembered the many lives lost while we literally stood above their watery grave. 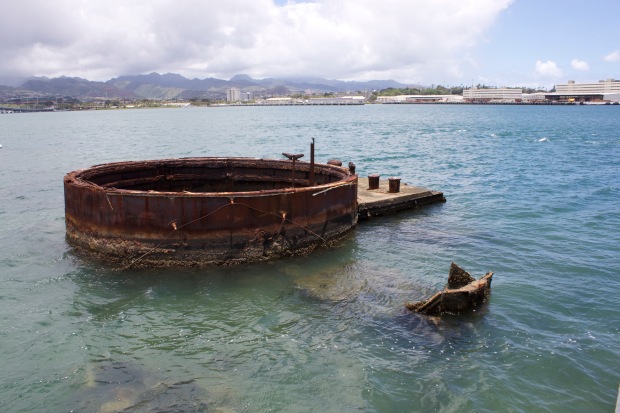 We hopped on the shuttle bus to Ford Island to check out the other two sites that were part of our tour. The U.S.S. Missouri was the last American battleship built, as well as the last to be decommissioned. The surrender of the Japanese on her deck brought World War II to an end. There are a variety of tour options available here–we chose to do a self-guided tour, which was a lot of fun, because there weren’t many people on board at the same time as us. We almost felt like we had the entire ship to ourselves!

The Pacific Aviation Museum consists of two World War II hangars, which still bear marks and bullet holes in the windows from the attacks on Pearl Harbor. This is a great museum for aviation enthusiasts, as it includes not just World War II-era planes (Japanese Zero, Stearman N2S-3), but also other vintage aircraft, including a Cobra attack helicopter, a Soviet-designed MiG-15 and “MiG Alley Exhibit,” an F-14 Tomcat, F-15 Eagle, P-40 Warhawk, “Flying Tigers” Exhibit, and more. 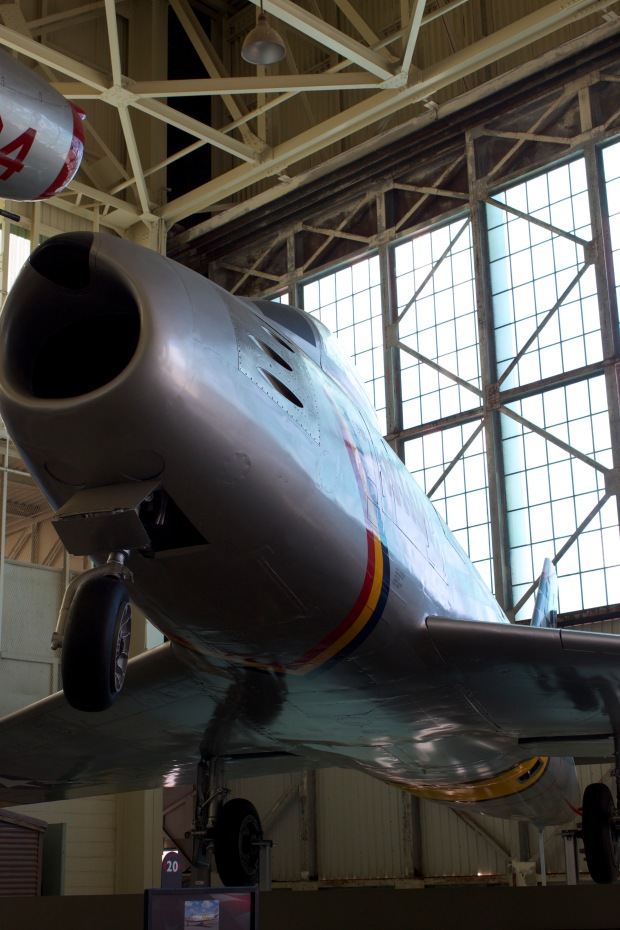 We’re so glad to have had the opportunity to visit this historic site where World War II began for the United States. It is definitely a must-do experience for any visitor to Oahu, no matter your nationality.

Check out the video of our hike and climb at Olomana Ridge Trail on Oahu!

Olomana Ridge Trail consists of three peaks rising dramatically from the Koolau Ridge: Olomana, Paku’i, and Ahiki. We only climbed Olomana, which is the first and highest peak, offering stunning 360-degree views from the top.

The trailhead is a short drive out of Honolulu, located just inside the Luana Hills Country Club. Although not a long hike, it is quite strenuous and not for the faint of heart. Steep and narrow at times, it also includes rock scrambling and a 15-foot vertical rock ascent near the end to reach the peak.

The friendly guy in the guard shack at the entrance to the country club told us to be on the lookout for wild pigs, which will normally run from humans; however, if there happens to be a dog nearby they can get aggressive, because they think they’re being hunted. We did see one pig along the side of the road as we headed toward the trail, but none on the hike itself. We made plenty of noise as we walked so anything in close proximity would hear us coming.

Pretty vistas along the trail offered great stopping points for water and short rests, and the trail itself is full of diverse and lush vegetation.

We made it to the top–and back down again–without incident. If you find yourself on Oahu and looking for adventure, this is a great hike! Use your best judgment and know your limits. The trail can be dangerous, especially in wet or windy conditions, and it consists of many narrow pathways, cliff edges, and rocky ascents. 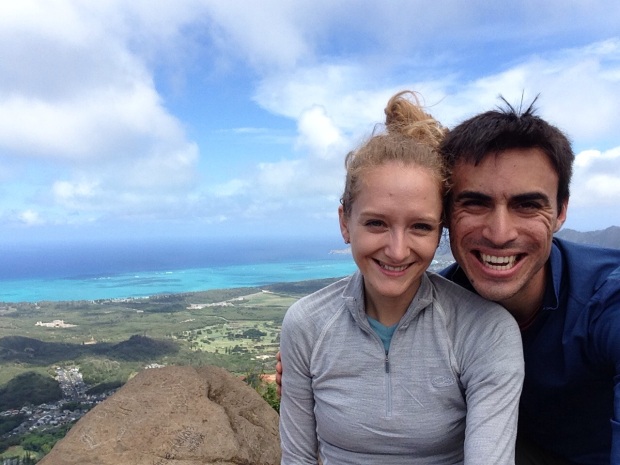 Check out the video of our trek here!